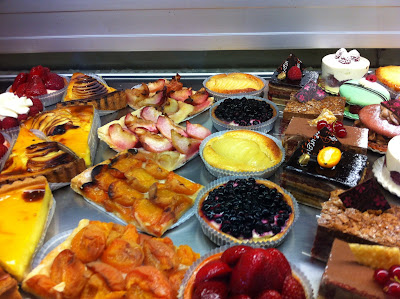 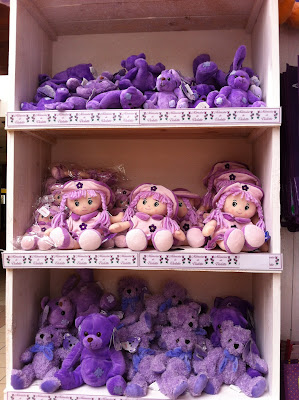 The newsagent has installed a new display of toys by the front door of his shop. Garish pink dolls and luminescent purple teddy bears and rabbits. An alarming sight so early in the morning . A gaggle of enamoured toddlers and less enamoured mothers are standing , imobile, in front of it.  Although it's barely seven the things are already beginning to  fly off the shelves. Clever product placement.

Off to the cafe under the arcades for a coffee. I shake hands with the beer and absinthe crowd .The local paper reports on the village fete. The banner headline : " Une fete quelque peu perturbe par la pluie ". Could anything be further from the rained out truth ?   The story under the headline talks of the great day being graced by a soleil timide .  Perhaps the reporter spent his day inside with the old farmer and a bottle of armagnac .

Home to find Madame Bay ensconced at the end of the kitchen table, large bowl of steaming coffee in her hand. Its going to be north of 40 degrees today so Madame Bay is in her warm weather gear. Gandhiesque layer upon layer of white chiffon .

Much excitement . It seems that open warfare has broken out between the established baker and the new competition in the small market town . The proprietrice of the established bakers, furious at losing so much custom to the new ( and better ) upstart, has daubed the slogan "  Go away . We don't want your bread here " ( a polite translation of the original )  across the competitions shop window. The mayor was called. Madame proprietrice hit him over the head with a broom . The gendarmes were called . They told her to wash off the offending slogan or go to gaol. She refused and was carried screaming into the back of their van .  Madame Bay relates the story with glee.

The balmy days of August in deepest France Profonde.
Posted by Angus at 7:46 AM