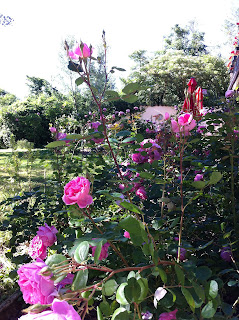 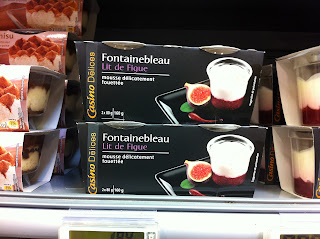 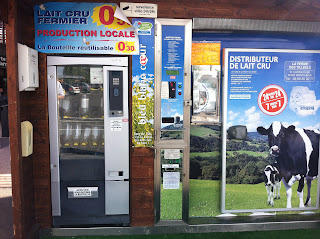 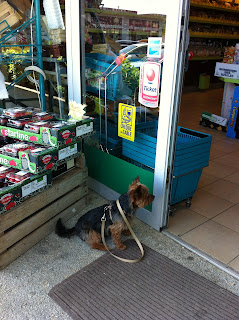 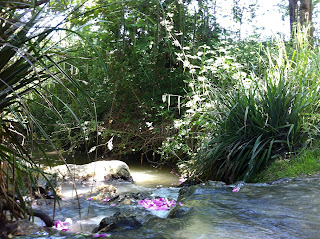 The Old English roses that were planted above the septic tanks have suddenly grown . In fact they've not so much grown as exploded . Last week they were a couple of feet high . This week , thanks to a combination of rain and sun, they're suddenly five or six feet tall and bent double with blooms. Three centuries of French plumbing clearly having a hugely beneficial effect on their root structure.

'The font' heads off for the Diamond Jubilee in London .  Angus has to stay behind to talk to men in dark suits. A late night text to tell me that the Archbishop of Canterbury seems to have been somewhat bemused by the revealing red and black latex outfit worn by Grace Jones for the Jubilee concert. The Queen looking every so slightly sad being there on her own.

Angus is left to fend for himself. At the supermarket he buys a fig dessert. It looks delicious on the packet . How wrong can you be ? A strange, slightly gritty, hyper-sucrose, concotion with a taste quite unlike anything found in nature.  Think liquid violet creams with added sand.

A new dispensing machine in the shopping mall car park . First, you pay €0.30 for a disposable plastic bottle. Then you take the bottle, insert it into a second machine and pay another €0.50 for a litre of milk. Isn't it easier, and cheaper, to just buy a quart of milk in the store ? The advert says the cows are fed on flax. Maybe this gives the milk a special taste . In the half hour I'm there no one uses it .

To the greengrocers for strawberries. The end of the season fast approaching. A small dog sits by the door. Unmoving , eyes focused on its mistress inside. People come and go. Some talk to the dog. Others pat it on the head. The dog ignores them all. Amazingly , it doesn't blink once. Canine devotion .

After last nights storm the little waterfall over the stream clogged with petals from the wild dog roses. Twenty dragonflies sunning themselves on the grass bank. Monsieur Bay tells me this is a sign that we'll have a ' scorcher of a summer '.

The pace of life in deepest France Profonde.
Posted by Angus at 10:15 AM