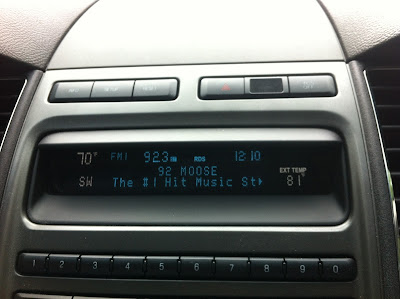 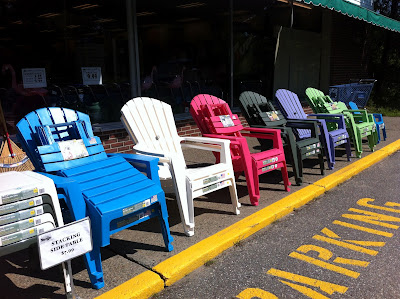 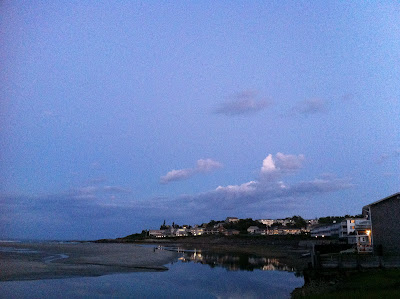 A long tail back on the interstate south of Portland. July 3rd. What a great day to schedule major road repairs. Who could ever have imagined the traffic would be heavy ? While we wait  'the font' points out that our rental Ford Taurus, '' built by the proud men and women of the UAW " as the sticker on the windscreen proclaims, has no less than 19 different type of plastics on the dashboard. Ruched, dappled, rucked, frounced, plaited, pleated, tucked, corrugated, puckered, rimpled and two Swedish words that roughly translate as striated. Plastic wood, plastic leather, plastic metal.' The font ' wonders if 19 different plastics on one dashboard might be some kind of record. Someone is clearly very bored.

We drive up and down the road in Ogunquit four times. 'The font' trying to match the photo of the inn from its website with the run down motels and fast food outlets we pass. Finally, with an 'Oh dear ! I suppose that might be it' we find the inn. Or to be more precise we find the pre-photo shopped original.  The sign in the forecourt  says " Fine Lodgings ". Underneath a smaller sign jauntily tells us  " You drive the miles. We provide the smiles ". On the other side of the parking lot our attention is drawn, irresistibly,  to a fifteen foot tall lobster in top hat and tails with a cane in its right claw. The illuminated  Fred Astaire of the crustacean world  . The sign might also say Crab 'n Lobster or it might say Crabby Lobster but it's now so faded it's impossible to be sure .

At the front desk a tatooed young man playing a computer game. Boots, white socks, cargo shorts and a black tee shirt with the words '' Grateful Dead. Europe Tour 1972 " written across it in runic script. Check-in formalities over (Angus looks again to see if we really have pre-paid in full) we are escorted to our room. We pass the 20,000 gallon hot tub , the salt water swimming pool and the bar. '' We can sell you a bottle of red or white wine or you can bring in your own ". Angus's sense of foreboding grows. This sense of unease is not helped by the fact that despite being one of the busiest weekends of the year there seems to be no one else around .

The suite , for that is what our guide terms it, is small and irregularly shaped. It is also very full of  furniture. In the centre a vast overstuffed, cushion covered bed. The bed has a black wooden headboard decorated with a dozen carvings of  hunting scenes. Men in feathered hats and lederhosen chasing deer through forests. Very Central European, very realistic . The sort of thing that would gave an inquisitive two year old nightmares. ''It's antique"  says the young man by way of explanation .

At the foot of the bed an enormous pull out sofa that's seen better days. Next to it an armchair. ' The font ' puts a bag on the chair and discovers it's a recliner , or to be more precise, a tipper. The bag falls on the floor. The chair continues to rock backwards and forwards as if possessed of a mind of its own. 'The font ' comments on the collection of metal cows placed, as if grazing, on the rafters. Each of them has a little label carefully tied around its neck saying ' moo '. '' People love them '' says the young man. '' I can almost believe it " ' the font ' replies . The young man takes this as a compliment and smiles.

"And now the peace dee resistance ". Our host opens a door into what turns out to be a simply enormous bathroom. One entire side is taken up by a glass wall. Visible behind it an array of matt black knobs and nozzles and , in the centre, a panel with a keyboard and a red flashing digital display. '' Turn this, press that and the shower turns into a steam room. Remember to open the louvre after use ". The young man pauses for effect. '' Press this, turn that and it becomes a twenty jet shower ". He then adds " It's awesome . You can get eight in there ". Angus is puzzling over the eight person shower  when he hears ' the font ' ask ''and what exactly is that ? " On the other side of the bathroom is  a double bath power jet Jacuzzi. Set at eye level on the right there is a portable television of 1980's vintage, on the left a trough of six red artificial geraniums. Above the taps , built four feet up in the wall , is an open fireplace. '' Is that a real fireplace ? " asks 'the font'. ' Yes ' the young man replies. ''Wouldn't it be dangerous if the embers fell out ?''. He gives us a look that seems to suggest we should get out more.

Over dinner last night the cost centres and visiting Texans listened to Angus relate this happy tale. They think the fonts choice of  inn sounds wonderful. An experience. A snip at $375 a night. Fine lodging indeed.